I came to see you today. So much has changed. Everything is different now. I miss you. I miss her. I miss the way that things used to be. Its so hard for me to understand why everything had to change. It saddens me. It angers me. I've been through so much hurt that I just can't comprehend why the pain keeps building. I've had enough. I don't want to hurt anymore. I don't want sad things to keep happening. I just want to rewind time and have things the way they used to be. I want the past and I want the future mixed together with the present time just taken away. I just can't keep carrying all of this pain. I can't keep feeling so hurt and like my heart is going to explode. Why is this happening to me? Why did you have to leave? Why did she?
Posted by K at 10:14 AM No comments:

A pain so deep that you can feel your heart as its breaking. An overwhelming sadness. Eyes swollen from constant tears. Sharp pains shooting through your chest.

I know their conversation was an innocent one but it doesn't make it hurt any less.
Posted by K at 11:33 PM No comments:

Okay so I am getting a bit overwhelmed. I have so many decisions I need to make and I'm having a hard time narrowing everything down. I'm trying to decide what I really want but its oh so hard! I've just been researching and praying. Its comforting knowing that no matter what it will be His plan for me and so it will be right. It is going to be amazing.

Jeremiah 29:11 -
'For I know the plans that I have for you,' declares the LORD, 'plans for welfare and not for calamity to give you a future and a hope.
Proverbs 16:9-
The mind of man plans his way, But the LORD directs his steps.

In other news:
This sweet little fella unfortunately has pink eye. It's spread to both eyes now so he is looking pretty pitiful. I hate it. I have never had pink eye(that I'm aware of) and the kid has never had it before this. It is miserable. Have you ever tried putting drops in a four years old eyes? It's next to impossible. He thrashes his entire body including head around, screams and cries at the top of his lungs and shuts his eyes so tight that I can not hold him down, keep his head still and pry an eye open while holding the drops by myself. IMPOSSIBLE!! When the husband is home or my mom is over we can get it done, somewhat successfully. However, most of the time I have been solo when drop time comes around so the best I can do is have him close his eyes and put a drop in the corner and then I have to force him to open his eye so it will fall in. Even that is torture for my baby. He screams to get it off of him and then once its in his eye he screams to take it out. Its awful. He doesn't understand it no matter how many times we explain it to him or have him look in the mirror and see how bad it looks. Breaks my heart having to put drops in but its one of things Mommas just have to do. I like pink but I don't like it that much!! Prayers for super quick healing would be awesome! Thanks. 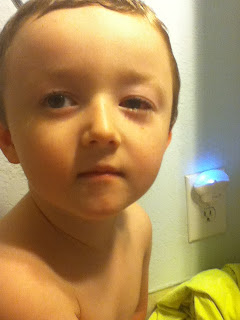 I am so excited for the future. There are so many changes happening in my life and while I would usually be anxious about them I am actually excited and ready for all the pieces to come together. For the first time in a long time I am truly content with my life.
Posted by K at 10:55 PM 1 comment:

K
My name is K. A working mom and wife just trying to get the hang of things and stay caught up in life. A photographer at heart and a wannabe cook/baker. I created this blog to have a place to record my journey of TTC and all the trials of motherhood.